Sounds romantic, right? Who wouldn’t want to spend time in a swamp? Well, I would – I love swamps (my favorite Talking Heads song is Swamp, too, if you want more proof). I’m not the only one. All over the state efforts have been made to set aside and protect vulnerable wetlands; marshes, bogs and swamps included. While the Manchester Cedar Swamp isn’t the only Atlantic White Cedar swamp in the state, it does have a bonus – Great Laurel, or as it’s sometimes called, Giant Rhododendron. This is a surprisingly large preserve (600+ acres) jammed between huge condo developments, some commercial operations and an abandoned-before-it-was-built college campus. I’m sure the citizens of Bow and Manchester are pretty glad UNH decided to expand campus operations in the Amoskeag Mills instead.

There is a parking area that can hold 10 cars or so and a kiosk that gives you some information about the types of flora and fauna you’re likely to see if you keep your eyes open. The first part of the trail leads in through woods with some large boulders and tons of mushrooms and Indian Pipe wildflowers. On trips to the property in late summer I found a lot of newts too, so be careful not to squish these little guys!

Then the trail splits into a loop that navigates more woodland and also comes close to a stream and vernal pools. If you take the right path it will lead you to the Cedars and then onto the Great Laurel. Both branches of the trail are loops, but there is another trail leading off from the Cedar trail that leads to more of the preserve and the section that allows hunting, so be aware of the seasons and wear your blaze orange – that includes dogs, which of course you should keep leashed!

There are only an estimated 550 acres of Atlantic White Cedar in all of New Hampshire and this preserve has 42 of them. There are many mature trees (Atlantic White Cedars can live over 300 years) as well as a single Black Gum Tree (that live even longer), and that, alas, I have never found. One of the reasons the habitat is precious is because of the Hessel’s Hairstreak Butterfly which only lives in these environments. The adults eat from the various flowering plants in the swamp such as dwarf raspberry, rhodora, sheep laurel and mountain holly, but their caterpillars only eat cedar leaves. And with so many of these beautiful wetlands disappearing, so are the butterflies. On a Nature Conservancy walk in another cedar swamp (NH has several, so stay tuned for more articles about them) a botanist reported that these rare butterflies have been found in NH, but they are difficult to find because they are tiny and often quite high in the canopy.

In and among the cedars you’ll find cinnamon fern, sphagnum moss, mountain and great laurel, skunk cabbage and a host of other water-loving plants. Once you complete this loop, you can head toward the Great Laurel grove which is beyond the power lines. The forest in between changes a bit and hosts a lot of different wildflowers including lady slippers and wintergreen. Milestone brook also flows though the preserve and has a really kick ass bridge built by, I think, a local Boy Scout troop. In all my wanderings and hikes I’ve never encountered Great Laurel anywhere else (except some cultivated plants which might be variations on the wild species).  And they are giant, ghostly and faintly primordial trees.  Much bigger than mountain laurel they can grow to 35 feet high. They bloom in early July and are amazing. 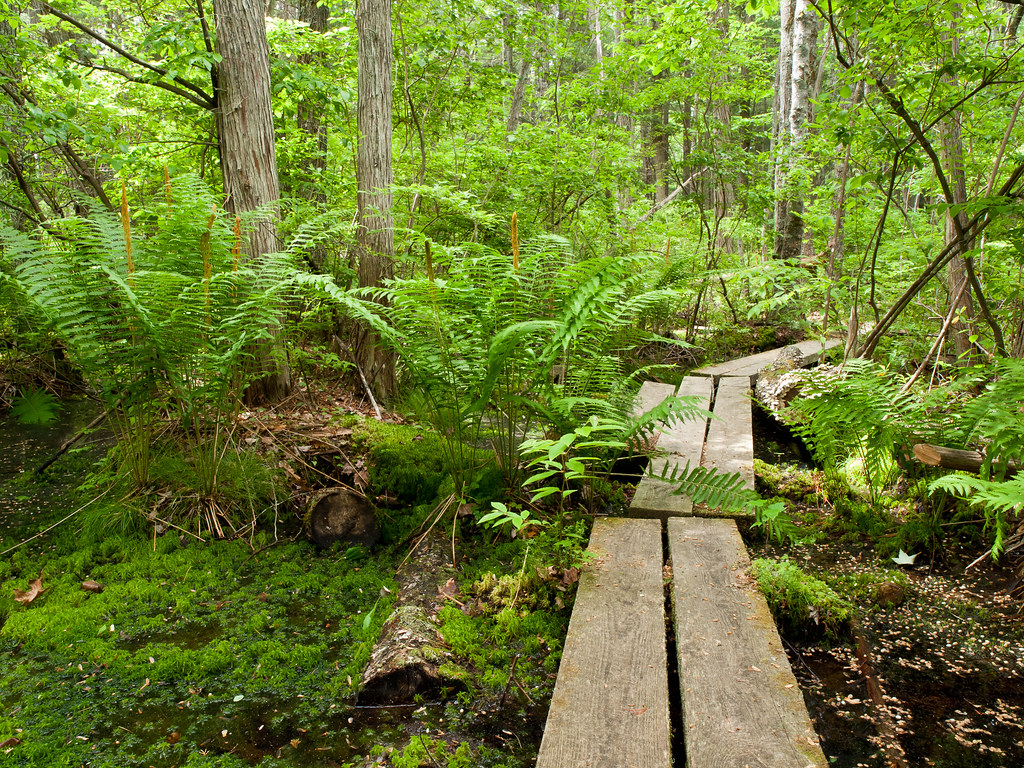 How to get there –

Head for the city of Manchester, NH

Take Interstate 93, then Exit 10 and head south on West River Road (a.k.a. Front Street), drive approx. 1 mile then turn right at the light onto Hackett Hill Road, drive approx. .7 miles then turn left onto Countryside Blvd. In approx 1/2 mile you’ll see the parking area on your left. The kiosk is somewhat buried in brush, but it’s there.

Happy trails and remember to carry out what you carry in (and pick up after those who don’t) and please leash your dogs!